“Spiritual care made an impact on my treatment.”
“You helped me connect to my Higher Power.”
“Being part of a spirituality group was so gratifying.”

These are the three comments that Christine Dawley, Spiritual Care manager, hears most frequently from patients who receive spiritual care services at Rogers. 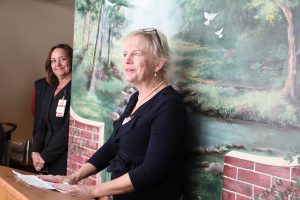 Hope and a prayer

It all started in 1996 with a hope and a prayer as a young Rogers employee named Linda Lentz inquired about the lack of spiritual care for patients. When interest was shown by leadership, she worked out an agreement to begin working four hours per week to help take care of patients’ spiritual needs.

She, along with a small committee, slowly began to lay the foundation of the Spiritual Care Program as she visited on-site with new contacts, developed a directory of local clergy, held prayer groups, distributed resources, drove patients to church, and coordinated services on campus.

“It was a very exciting experience how prayers and contacts all came together,” Linda reflects. “A true blessing for Rogers.”

The fledgling program ebbed and flowed until 2003 when the committee learned that the new hospital expansion would include a chapel with a full-time chaplain. However, changes were around the corner. Within two years, clinical staffing took priority over the chaplaincy position, and the spiritual care hours were eliminated. The committee was told that they must raise funding on their own to support the program.

They were a “small, but mighty group” says Jonna Pestka, manager of Social Services, as she describes the planning committee. Jonna was one of three Rogers employees who still walk the halls today. She, along with Linda, now a full-time teacher in inpatient care, and Mark Rossing, MD, medical director for OCD and Anxiety Adult Residential Care, were among the early committee members.

Together with the Rogers Behavioral Health Foundation, they began looking for potential donors, marking a significant milestone in the Spiritual Care Program as we know it today.

Changes on the horizon

This is the original chapel from the 2nd floor of the main hospital building in Oconomowoc (2012).

Through a mutual connection, chaplain Carol Jefferies was asked to join the committee to help develop the program, and with her came the thoughtful planning and partnership of businessman and philanthropist, John Kasdorf, and his wife, Sherri.

Because of the commitment from John, Carol moved into a part-time chaplain position and, along with Rogers’ medical and administrative leadership, began a one-year pilot program with Eating Disorder Recovery Adult Residential Care that included spiritual care group sessions, one-on-one sessions, and weekend transportation to church for any of the 24 residents who was interested. At the end of the year, the program was approved internally, and Spiritual Care staff were then able to attend programs with requests for services.

“I am thankful Rogers was open so many years ago to developing a pilot program in spiritual care as part of its work in holistic health,” John says.

“Spirituality has been a guiding element in my life’s journey. As such, I felt that it was important that patients have access to spiritual care to support themselves during the difficult road to recovery if they choose. It is truly rewarding to know how many patients it has helped, and Sherri and I look forward to the continuation and growth of in-depth spiritual care at Rogers.” 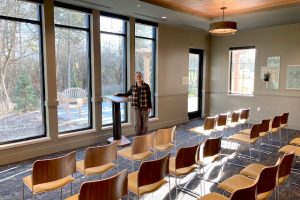 In 2009, Christine Dawley, MS, LPC, was hired as the first full-time coordinator to help oversee the program. Today, Christine serves as the manager of Spiritual Care.

With the official green light to move forward, the Foundation began to actively raise all funds for the Spiritual Care Program, including salaries and resource materials. It proved to be an exciting task as the program quickly expanded to West Allis and, in 2007, the demand for a second part-time chaplain was met. Two years later, Christine was hired as the first full-time Spiritual Care coordinator to help oversee the program. At that time, they were seeing approximately 50 patients per week through groups and individual sessions.

Throughout the next several years, the number of patients grew considerably, as did the need for spiritual care. Group sessions grew in quantity and size, requests for individual consultations soared, and participation in ecumenical services flourished.

In 2015, another chaplain was hired to support spiritual care in West Allis and Christine was promoted to Spiritual Care manager. A year later, Spiritual Care in Brown Deer began.

By all accounts the program was thriving, but it didn’t come without sadness when, in 2016, a chapel dedication ceremony was held in honor of Carol, who left the program after 11 years due to health issues.

After this time, a new full-time chaplain was hired to support the Oconomowoc campus. The chaplains now averaged 144 patient contacts per week and held 15 weekly group sessions. 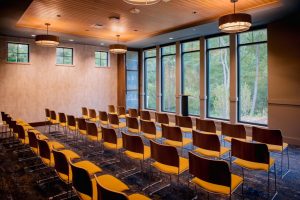 The Spiritual Care Program moved into the Ladish Co. Foundation Center in the fall of 2021. The space is home to the chaplain’s office, an outdoor meditation garden, and the Tadross Family Chapel. It can be accessed by family members as well as patients.

According to Christine, the program’s mission has remained the same since 1996: to support our patients’ spiritual beliefs by asking what spirituality means to them and how their personal beliefs can help them in treatment and in life.Today, patients may choose to attend spiritual care reflection groups, visit the chapel and resource library, meet individually with one of our chaplains, attend on-site ecumenical worship services, receive information on local worship services, and request visits from community clergy.

It’s incredible to think that these humble beginnings have led to more than 74,000 spiritually- oriented patient contacts through group and one-on-one sessions. This year alone, two full-time and one part-time chaplains and one intern will provide more than 6,400 contacts across Rogers’ Oconomowoc, West Allis, and Brown Deer locations. In total, they will provide group sessions in 12 programs and spiritual consultations to patients in 26 programs.

The Foundation raises approximately $200,000 per year to sustain the program. In total, it has raised almost $2.2 million in donations, thanks to a handful of gracious donors, among them The Kaztex Foundation (John and Sherri Kasdorf), Duane and Dorothy Bluemke Foundation, Theodore W. Batterman Family Foundation, and the Stackner Family Foundation.

Most recently, the Spiritual Care Program moved into the Ladish Co. Foundation Center, giving it a more easily accessible, prominent place on Rogers’ main campus. With seating for up to 50 people, the new Tadross Family Chapel allows ample space to grow attendance at ecumenical services and accommodates personal use with a larger resource area. In addition, the space features an outdoor meditation area for visiting families.

Since opening in the fall of 2021, the space has been used often by patients, parents and siblings, support group members, and staff who wish to seek a moment of peace in their day.

Sadly, Carol lost her battle with cancer in 2018.

“I promised Carol before she passed that we would build this chapel,” says Pat Hammer, Rogers president and CEO. “I am so thankful for her vision and for all of our donors who placed their trust in us to grow the Spiritual Care Program and to help people the way we have. I am truly humbled by their generosity.”

The purpose of Rogers is to care for people’s mental health challenges to help people live healthy and productive lives. The Spiritual Care Program offers an additional resource — it touches souls and inspires hope when there is none, and funding from our grateful donors makes it possible.

Donate in support of Spiritual Care

Rogers Behavioral Health Foundation is registered as a 501(c)(3) nonprofit organization. Contributions are tax deductible to the extent permitted by law. Our tax identification number is 39-136307.